13 Best 4K Action Cameras in 2021 — If you’re someone who likes to go on outdoor adventures, an action camera is a must-have device. Not only does it capture your venture, but it is also portable and easy to use as well.

Not to mention that nowadays a lot of action cameras actually support 4K resolutions as well. This means you get to capture every moment of the adventure in its best crisp quality.

Choosing the best camera to bring with you on adventures can be a little overwhelming. Especially because there are just so many options available right now.

Lucky for you though because in this article, we have rounded 13 best 4K Action Camera recommendations in 2021. Let’s check them out!

One of the best options when it comes to 4K action cameras is surely the HERO9 Black from GoPro released back on September 16th, 2020.

Supporting multiple lenses, the HERO9 Black can shoot stunning 5K video with 60 fps and maintains superb details even with zoom-ins and outs.

Weighing at only 158 grams, the HERO9 Black also produces 20MP high-quality photos. It also comes with a feature called SuperPhoto to make sure users get the best shot.

Not only that, the HERO9 Black body is built to be rugged and completely waterproof as well. It can withstand dust particles and be submerged in water of up to 33ft (10 meters).

As of right now, the GoPro HERO9 Black retails for $200. It has a bundle available for $350  with a year subscription to GoPro and free accessories. 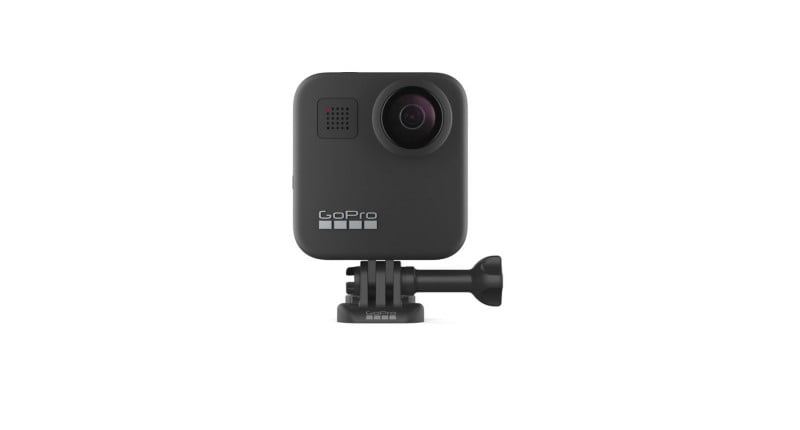 Another great option for the best action camera is the GoPro Max. Despite being released two years ago on October 24th, 2019, this camera can still stand tall among the competitors.

The GoPro Max 360 Action Camera can support Spherical videos up to 5K at 30 fps. Not only that, but it also comes with dual-lens and supports 5.7K high-quality photos capture.

Additionally, with the new Ultra-wide MaxSuperView feature, GoPro MAX can live stream at 1080p resolution. Users also get the option to save photos to the cloud automatically.

Weighing at 5.75 oz (163 grams), the GoPro Max is completely waterproof to water down to 16ft or 5 meters. It also has a compact design with built-in folding fingers.

As of right now, the GoPro Max is priced at $399.98. Every purchase includes a 1-year subscription to GoPro and unlimited cloud storage. 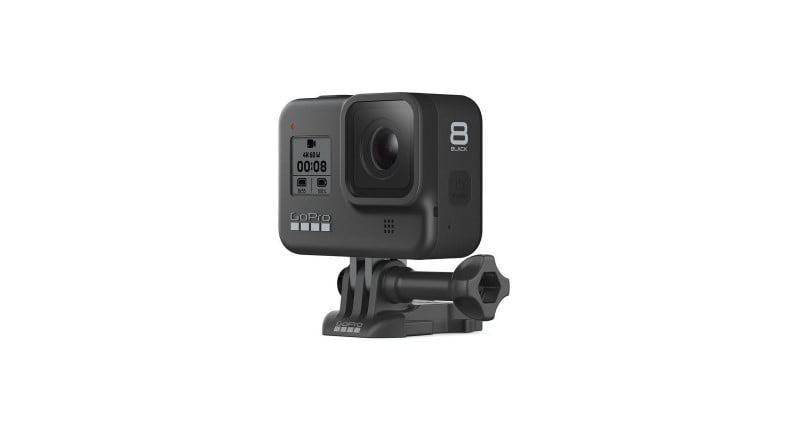 Released alongside the Max Hero, the GoPro HERO8 Black is also one of the best options when it comes to action cameras in 2021.

Despite being released in 2019, the GoPro HERO8 Black supports 4K video recording at 60 fps. It can also be used to record 8x slow-motion videos and capture LiveBurst pictures.

There’s also a HyperSmooth 2.0 feature that functions as a stabilizer to produce smoother videos and reduce wind noise for high-quality recordings.

In terms of its design, the GoPro HERO8 Black camera is waterproof up to 33ft (10 meters). It weighs around 4.13 oz (117 grams). There are also multiple Mods available to purchase.

The GoPro HERO8 Black is available for purchase with a price tag of $279 including a 1-year subscription GoPro or $299 without a subscription.

Other features worth noting are the 14 voice commands, built-in mount, face & scene detection, and many more.

Another great option for an action camera with a 4K support is the DJI Osmo Action. Released back in 2019, the camera is loaded with various high-resolution features in its tiny body frame.

The DJI Osmo supports up to 4K at 60 fps HDR video recording and slow-motion videos. Images can be captured in high-quality resolutions up to 12MP.

When recording in 4K at 30 fps, the camera offers HDR support. It has a wide dynamic range of features that makes it easy to transition between light and dark modes.

In terms of design, the action camera comes with a compact and small body frame. It weighs 124 grams and measures about 65×42×35 mm.

Additionally, the DJI Osmo Action supports a watertight seal and a hydrophobic coating on the back touchscreen. It can withstand water of up to 11 meters.

As of right now, the DJI Osmo Action retails at $199. There are also other accessories and add-ons available for purchase. 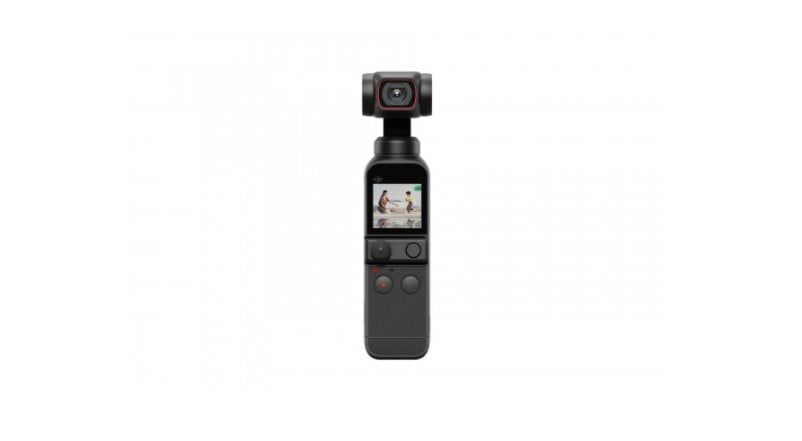 If you’re looking for a newer release of the best action cam, the DJI Pocket 2 is something worth checking out. As the name suggests, the Pocket 2 is a tiny action camera perfect for traveling.

Perched on a 3-axis gimbal stabilizer and a grip that contains control buttons and a screen, the camera measures about 124.7×38.1×30 mm and weighs only 117 grams.

The camera supports video recording up to 4K Ultra HD at 60 frames per second. It also has advanced video recording features such as time-lapse, story mode, and active track 3.0.

As of right now, this tiny pocket-size camera retails for $439. It has two colors: Sunset white and Classic Black. 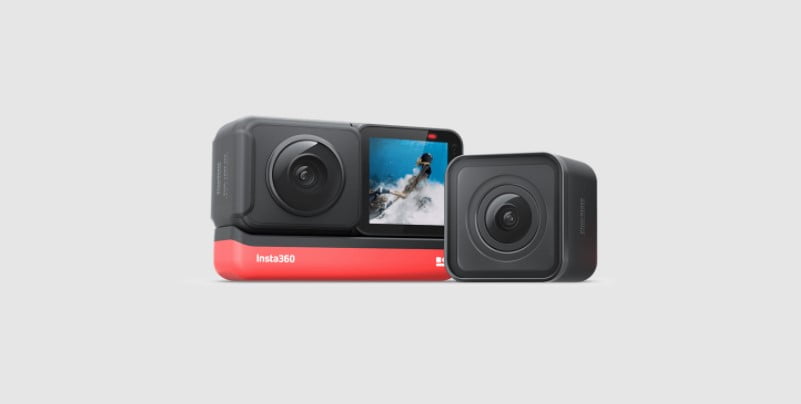 If you’re looking for an action camera that can capture 360 videos, the Insta360 One R Twin Edition released back in February 2020 can be a good choice.

Besides being able to record from any direction, this action camera can record video recordings from  4K resolution at 60 fps, 1080p at 200 fps, and 3K slow motion at 100 fps.

The Insta360 One R Twin Edition also features HDR and Night Shot recording modes and a 360-degree Dual Lens Mod with Auto Frame feature that chooses the best lens to shoot from.

Weighing at 121 grams, this Insta360 One R is rated IPX8, which means this camera is completely waterproof up to 5 meters of depth.

As of right now, the Insta360 One R Twin Edition is priced at ‎$479. You can purchase it through the official store, AliExpress, or Amazon. 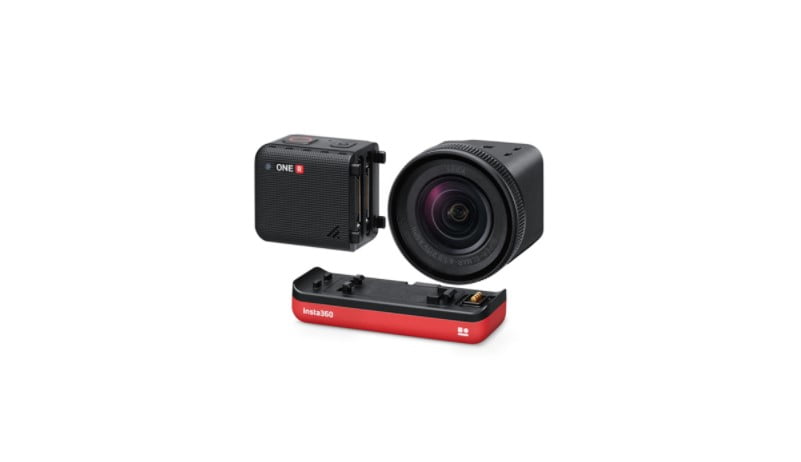 If you don’t need a dual-lens, the Insta360 One R 1 Inch Edition is your best bet. With a reversible touchscreen, this camera offers features of the Twin Edition and much more.

Released in August 2020, the Insta360 ONE R 1 Inch Edition also comes with a 4K support at 60 fps. Even better though, the camera also features a 5.3k video resolution at 30 fps.

It comes with a premium 1-inch sensor that lets users capture 19MP high-definition resolution pictures. There are also features such as HyperLapse, night scene, flow stabilization, and so on.

In terms of design, the Insta360 ONE R 1 Inch Edition is pretty light and adaptive. It only weighs 158 grams and users can change up the touch screen to their liking.

Right now, the price of the Insta360 ONE R 1 Inch Edition is around $549. You can also get a dive kit addition alongside the camera for $50 more. 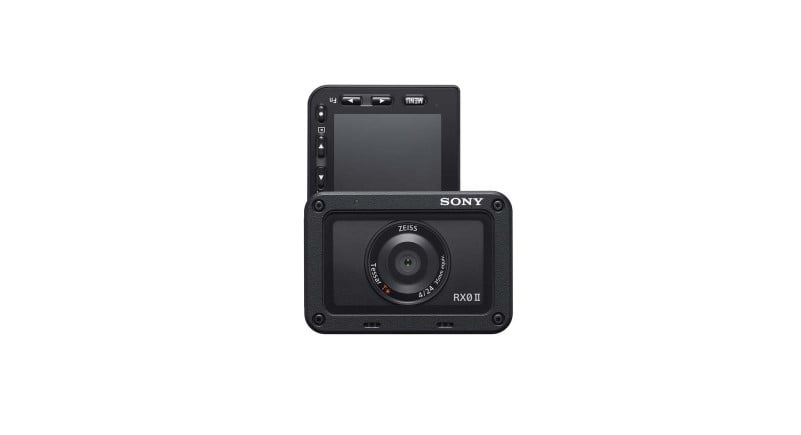 Another action camera that supports 4K resolution is the Sony RXO II. Released in April 2019, this camera is claimed to be the world’s smallest and lightest premium compact camera.

With its portable and light body frame weighing only 132 grams, Sony RX0 II targets vloggers who like adventures and create video and picture content on the move.

The camera comes with the ability to record 4K videos at 30 fps. It has an LCD screen that can be tilted up to 180-degree, making content creation and vlogging much easier.

Similar to its predecessor, the Sony RX0 II is also water-resistant (up to 10 meters deep), dust-proof, shockproof, and extremely compact

The Sony RX0 II went on sale at the end of May 2019 at a price of $699. Sony also provides separate add-ons users can purchase such as gripping tools and so on.

If you’re looking for an affordable budget action camera, this next option is for you. Released sometime in 2019, the EK7000 Pro 4K delivers 4K videos at 25fps and 2.7K videos at 30fps.

It comes with multiple adjustable view angles of super wide, medium, and also narrow. Users can easily adjust the lens to their liking through its 2-inch IPS display responsive screen.

For pictures, the EK7000 Pro is upgraded to 16MP from its predecessor. It can capture every photo and picture in crisp detail and high-quality clarity.

Design-wise, the  EK7000 Pro camera is compact and light-weight, weighing only 2.2 oz (61 grams) with a memory card and battery inside.

While the camera itself isn’t waterproof, the EK7000 Pro can go down to 40 meters of depth just fine thanks to a waterproof case that can be bought separately.

As of right now, you can get the Akaso EK7000 Pro for only $69 on its official website or its authorized retailers worldwide. 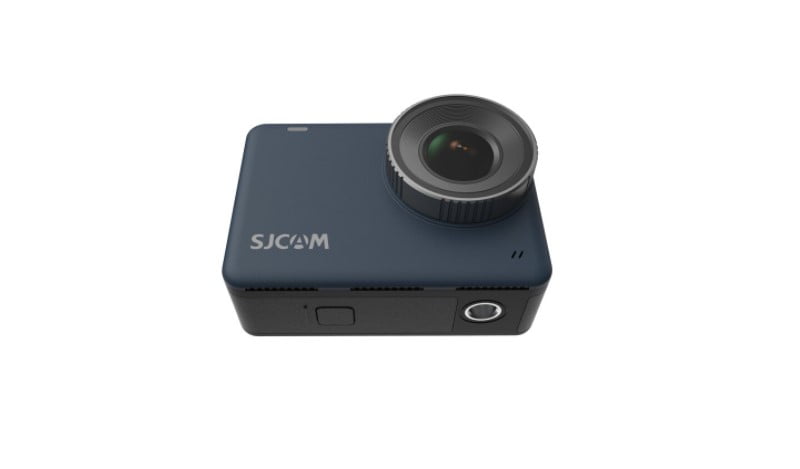 Another great recommendation for an action camera that supports a 4K recording at 60fps is the SJ10 series from SJCAM released on the 12th of June 2020.

With a 2.33 IPS touch display at 310 grams, this SJ10 camera is the perfect option for vlogging and live streaming. It is light, portable, and has a super smooth gyro stabilization feature.

In addition, the SJ10 is also equipped with a dustproof and waterproof body frame that can withstand the depths of up to 5 meters as well as a dust storm.

With the price of $249, the SJ10 is the perfect option if you’re looking for a budget yet premium action camera that does it all. 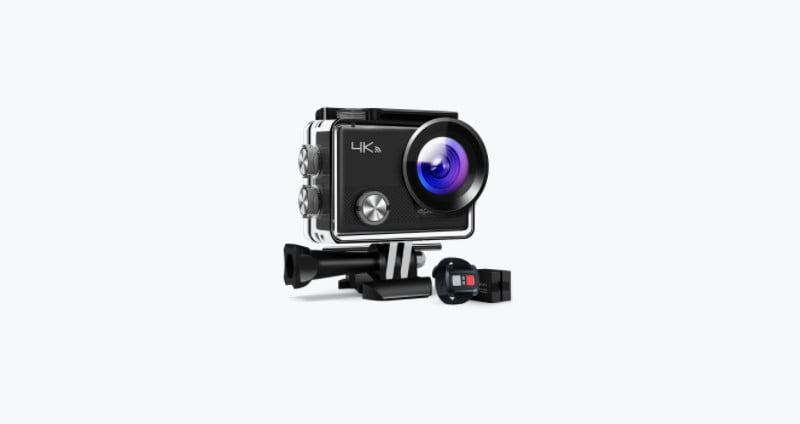 If you’re looking for another recommendation for a budget action camera, this APEMAN A77 is worth checking. Released in June 2017, this camera supports a 4K resolution at 25 fps.

Though it is not as advanced as other cameras in this list, the APEMAN A77 camera can record videos in the Ultra HD resolution and take high-quality 16MP photos.

It also comes with built-in WiFi and HDMI connectivity. Users can transfer files quickly and easily through local desktops or smartphones via the Apeman app.

While the Apeman A77 doesn’t actually have a waterproof body, its waterproof case can go up to 30 meters deep. Moreover weighing only 115g, this camera is perfect to bring everywhere.

As of right now, the Apeman A77 retails for only $65.99 on its official website. There are also other accessories available for purchase as well. 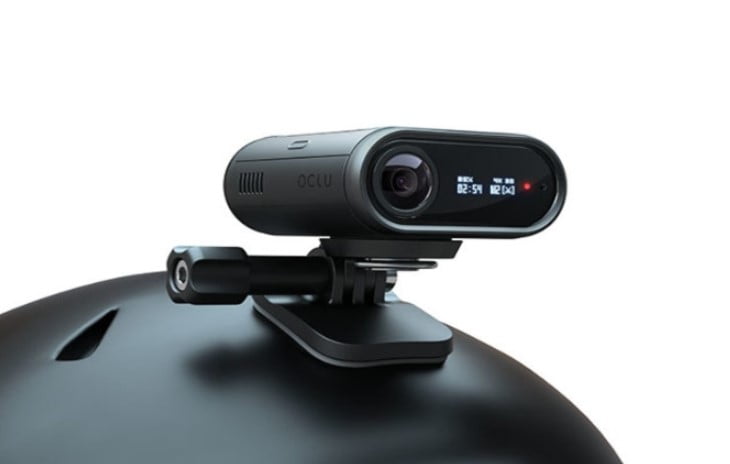 For a mid-range best action camera option, OCLU is one of the best. Released back on September 3rd, 2019, the camera provides ultra-sharp image and video quality.

Supporting 4K video recording at 30 fps and 1080P at 120 fps, the compact and lightweight camera (only 101 grams) comes with so many great features.

The OCLU camera is now on sale for $199 on its official code. It also offers free shipping & returns using the code: OCLU100.

The Drift Ghost 4K is an action camera widely used among biker and cyclist adventurers. Thanks to its lightweight design of 120 grams, the camera is easy to mount on helmets and vehicles.

When it comes to the camera resolutions, the Drift Ghost supports a 4K Ultra-HD with 30FPS, stunning slow-motion in 1080P, 12MP photos, time-lapse, photo burst, automatic stabilization, and many more.

In addition, the camera also comes with a rotating lens. Users can easily align their shot regardless of the mounting position by turning the lens up to 300 degrees.

In terms of its waterproof level, the camera cannot withstand water by itself. However, the waterproof case is capable of reaching depths of up to 131ft (40 meters).

Released on September 2nd, 2020, the Drift Ghost 4K now retails for around $355. You can purchase the camera through its official website or any online eCommerce store.

4K action cameras are essential if you want to capture every unforgettable moment of your adventure. In this article, we have given you 13 recommendations of the best options this year.

We have also provided you with a short review of each one as well as its prices. That being said, we hope this article will help you find the best pick for your adventures. Good luck! 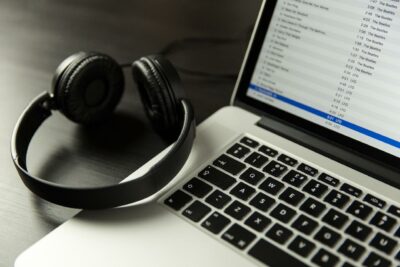 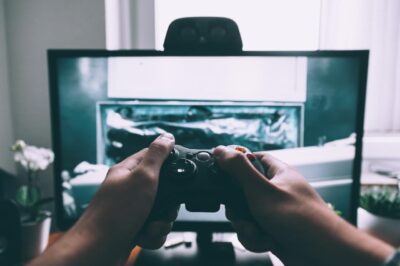 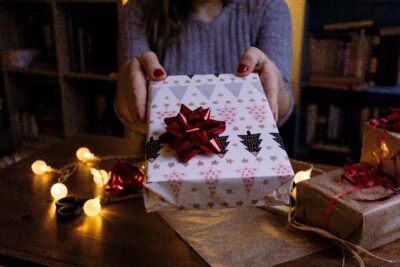 November 19, 2021
There are no comments yet No comments